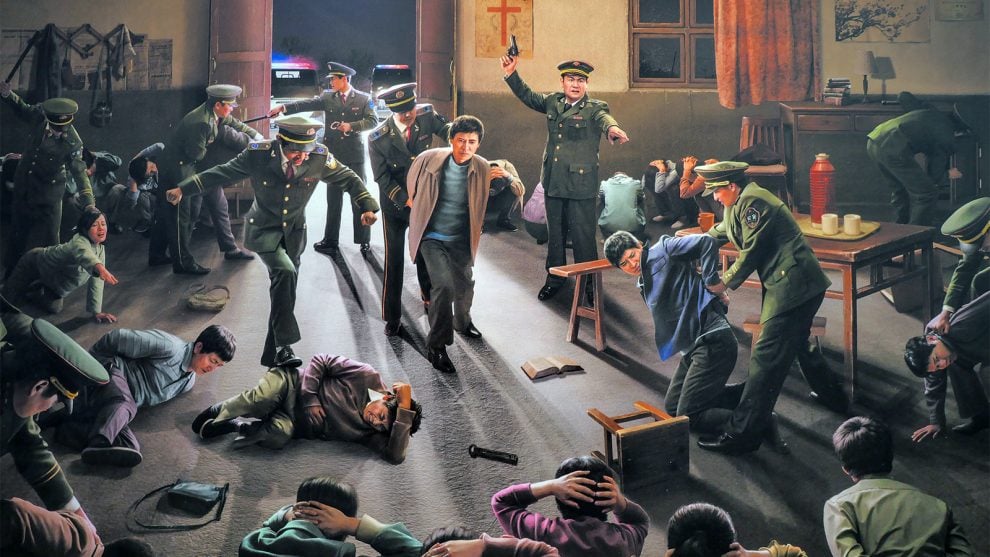 Surveillance in China is among the most oppressive and sophisticated in the world. Church attendance is rigorously monitored, and many churches are being closed down—whether they are independent or belong to the Three-Self Patriotic Movement (the officially state-sanctioned Protestant church in China). It remains illegal for under-18s to attend church. All meetings venues had to close during the COVID-19 crisis, but some churches were forced to remain closed once restrictions began to lift, and were quietly phased out. The old truth that churches will only be perceived as being a threat if they become too large, too political or invite foreign guests, is an unreliable guideline.

Christian leaders are generally the main target of government surveillance, and a very small number have been abducted. “They are simply snatched away,” says an Open Doors source, “only to appear months later in a kind of house arrest, where they get re-educated.’’

If someone is discovered to have converted from Islam or Tibetan Buddhism, their family and community will usually threaten or abuse them. Their husbands may be pressured to divorce them, to persuade them to reconvert. Neighbors may report any Christian activities to the authorities or the village head, who would take action to stop believers.

We have good news! Want to know how to be saved? Click here and here for more.

In this interview, Sean McDowell discusses how and why to obtain an integrated worldview. Check out his youtube channel https://www.youtube.com/c/SeanMcDowel&#8230; …

There’s plenty of evidence to suggest the detrimental impact of fatherlessness in society. It’s dangerous to disregard the importance of …

Here is a great conversation with Doug Wilson and Michael Brown. The charismatic church is the fastest growing part of …

This is simply breathtaking… Prepare yourself for another Susan Boyle moment, this time a pastor is on the target seat. …

It is exciting to see Franklin Graham follow in his dad’s footsteps. We need more evangelism and evangelists. The world …

Compilation of several clips of Voddie Baucham explaining the good news of Jesus. Significant video editing was added to create …

Dennis Prager sits down with Tim Ballard, Founder and President of Operation Underground Railroad (O.U.R.), an organization that has freed …

Watch and learn as Dr. Greg L. Bahnsen teaches Christians how to think like Christians. Bahnson reveals that our job …

How should we respond to the attacks we receive from LGBTQ activists? Tom Gilson (@TomGilsonAuthor) has some great suggestions. Tom …

Here is a stunning takedown of what we do not know about race in America. This is well worth the …

Here is some great insight on parental involvement with scriptural worldviews. George Barna is the founder of The Barna Group, a …

Pray for Syria Lift up the political and military situation in Syria. The civil war has continued for more than …

The march to destroy the sexual values that God has given us continues unabated. It is vile and evil. We …

I frequently hear from atheists the myth that we do not know who wrote the gospels. They are said to …

It is easy to believe this is a slippery slope issue. It is not. It is a part of a …

The chemical castration of minors is horrific. Consider this insight from Dr. Michael Brown (www.askdrbrown.org). Michael is the host of the nationally …

This may fall into the category of an interesting diversion. There are a lot of controversial thoughts on this topic. …

It is beyond me how you can argue for abortion up to the time of birth. My only explanation is …

Increasingly we are hearing stories like this from parents. It is heartbreaking. We need to listen and act to stop …

Frequently we hear from atheists that the accounts of Jesus in the New Testament are not reliable. They are wrong …

Actor Kirk Cameron began his career in Hollywood starring in ABC’s TV sitcom “Growing Pains.” His success on the silver …

We are citizens of heaven and not of this world. That is the life of a follower of the Way …

I believe that the Bible teaches that God made us male or female, and no matter our own feelings or …

Check this out from Derek Prince. Derek was an international Bible teacher who was highly revered for his theological insights …

I have been a lifelong member of the Baptist Church. The big and revolting news of the day is the …

Check out this great short video from PragerU. PragerU promotes American values through the creative use of educational videos that …

Thomas Sowell has studied and taught economics, intellectual history, and social policy at institutions that include Cornell University, UCLA, and …

Are you a watchman? God calls some to be watchmen. It can be a great role. Check this out! Watchmen …

This is a trend that has started in some parts of the United States. Some states have “prohibited state-licensed mental health …

Pray for Sudan After the fall of former dictator Hassan Omar al-Bashir in April 2019, the transitional government under the …

This is an excellent article with some great insight why many young Christians turn into apostates. Larry Alex Taunton is the …

A portion of a sermon preached by Pastor Alistair Begg on November 20, 2019. This really is a must watch. …

Greg Koukl of Stand to Reason explains how to rephrase the question that stops Christians in their tracks. Greg founded …

These reactions were gathered at the premiere of The God Who Speaks in Charlotte, NC at the National Conference on …

Here is a great article from John Zmirak. John is a senior editor at The Stream and author or co-author of …

It is always helpful to know what the terms we read in scripture mean. There are a lot of great …

On this site we explore the tools Jesus gives us to work out our faith in our culture. As a …

Pray for Myanmar Pray for those who have left Buddhism to follow Jesus—that God will strengthen, encourage and protect them. …

My mother always defended me no matter what. She could calm me down. She would soothe the hurt like no …

I am not a pastor but I am sure this is a deep pastoral concern. It is true for all …

On the evening of May 2, Politico released a draft opinion written by Supreme Court Justice Samuel Alito that would …

This is a great article worth considering. She makes some great points. It is from Abigail Shrier. Abigail is an …

A new racism has emerged in our country. The solution is Jesus. Jesus is the great unifier of all races …

I frequently hear this from skeptics, atheists and those justifying some immoral behavior. Here is a good overview of the …

I am a big believer in this. Why? It is completely scriptural. The author is Dr. Georgia Purdom. Georgia holds …

What is going on in China for people of faith is horrific. Join in prayer for peace and comfort despite …

Here is some great insight and research on the age of earth. Don Batten received both his B.Sc.Agr. (First Class …

God is not in the politics business. There are some things God hates. All politicians ought to pay attention. Nolan …

Here is a very interesting article and graphic taxonomy (see graphic at the bottom) on “Wokeism” by Michael Shellenberger. …

The culture of death is no longer a slippery slope. We have arrived at full blown evil and it is …

We must express our faith at work. Here is a great article by Hugh Whelchel. Hugh is Executive Director of …

If you like podcasts, you might enjoy this episode of ID the Future spotlights some problems the fossil record poses for …

Leftism is a worldview. It is both tyrannical and evil. It is full of God-haters and apostates. In many cases, …

You may want to check this out. I find it a useful tool and framework. Having a scriptural theology makes …

This is a remarkably interesting question from a biblical worldview. There seems to be some confusion in the Christian community. …

Are people born gay? It is a great myth, but it defies the word of God. Homosexuality is a sin, …

Pray for Saudi Arabia Many Christians in Saudi Arabia are migrant workers who are already abused for their minority status. …

This is sad to see. As followers of Jesus, we must clear in our support of clear biblical truths. This …

Easter is an incredibly special day for followers of Jesus. Check out these great apologetic articles on the resurrection. Jesus …

Check out this great article from Ryan Bomberger. Ryan has a rather unique perspective of the innate nature of Purpose. …

Good Friday, also known as “Holy Friday,” is the Friday immediately preceding Resurrection Sunday. It is celebrated traditionally as the day …

Christian unity is important. We all need to focus on it. Our focus should be on perfecting (maturing) our unity. …

According to a study by the Cultural Research Center (CRC) at Arizona Christian University, 6 % of Americans hold to a …

There is an ongoing dialogue among the followers of Jesus about what cultural issues we should speak out about, if …

LIFE is sacred, both in the womb and outside the womb. There are numerous teachings in Scripture that make it …

This take from Samuel Sey is right on target. We should have condemned her appointment. We’ve reached a point in …

If you evangelize or interact with atheists, this is worth a quick read. This is from Matt Slick. Matt is …

Pray for India Give thanks to God that many people are coming to know Jesus after being healed of sickness; …

In the world of “scientific research”, this is a big “no no”. No reputable scientist would do it. It is …

Here is some great news! I am thinking that this is not the end of it, however, as we see …

Here is some excellent insight from Greg Koukl. Greg Koukl founded Stand to Reason in 1993 and currently serves as …

What strategies do Progressive Christianity use to help lead Conservative Christians to have a change in basic assumptions about sin, …

In case you missed it, March 31 was Transgender Appreciation Day as so declared by the Biden administration. And no, …

And we continue to go to their theme parks and watch their movies? This is sick and evil. We have …

We should all be clear about what evolution is all about. Evolution is really about atheism. It is a distortion …

I love these stories of salvation of those who accept the good news of Jesus. Check this out via Jeannie Ortega …

Let us Pray for Iran Pray that President Raisi will honor the rights and contributions of Iran’s religious minorities. Pray …

Originally posted on Poetry, Short Prose and Walking:
And the?Lord?God formed man of the dust of the ground, and breathed into his nostrils the…

Here is the ERLC (Ethics and Religious Liberty Commision of the Southern Baptist Convention) doing some magnificent work. Catherine Parks …

We live in a “Woke world” for sure. There is a move to neuter God the Father. Check out this …

Originally posted on The Domain for Truth:
Establish the need: Do you know what is apologetics? And if you do know what it…

This is getting pretty sad. It is pretty easy to answer a question about how to define a woman. Judge …