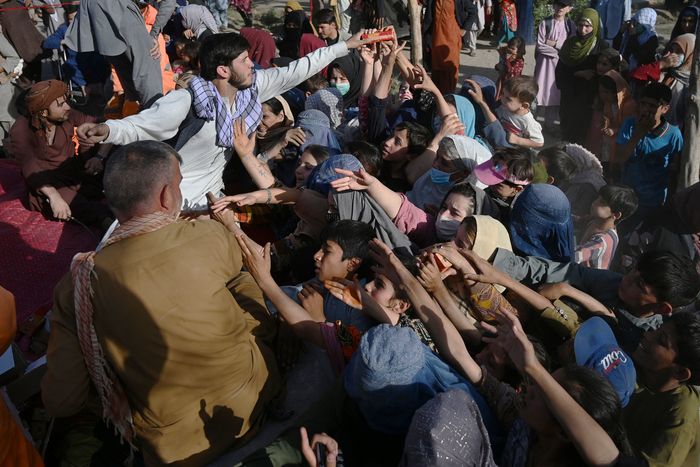 Is Islam really the religion of peace?

Not hardly. Afghanistan is back in the news. We must pray for the real peace that only Jesus can bring. The Taliban is taking over. It is predictable.

Check out this article from Mario Alexis Portella. Mario is a priest of the Cathedral of Santa Maria del Fiore and Chancellor of the Archdiocese of Florence, Italy. He has a doctorate in canon law and civil law from the Pontifical Lateran University in Rome; he also holds a M. A. in Medieval History from Fordham University, as well as a B.A. in Government & Politics from St. John’s University. He is also author of Islam: Religion of Peace? – The Violation of Natural Rights and Western Cover-Up.

Al Jazeera reported on Wednesday that Afghanistan’s government is arming local groups as part of a three-phase plan to push back the Taliban offensive, the Afghan interior minister General Abdul Sattar Mirzakwal stated.

Mirzakwal said on Wednesday that Afghan forces are also focusing on trying to secure main highways, large cities and border crossings, after the Taliban seized nine provincial capitals in under a week.

U.S. officials said they did not expect, after President Joe Biden announced the decision to withdraw American forces from Afghanistan by September 1, the takeover of any provincial capital until fall at the earliest.

Instead, as reported by the Wall Street Journal, a carefully planned strategy carried out by the Taliban, also known as the Islamic Emirate of Afghanistan, has produced swift battlefield advances, allowing insurgents to seize a succession of provincial capitals since Friday. In fact, over the weekend, the Taliban seized a string of provincial capitals, including the strategically and economically important city of Kunduz. The battlefield gains come as the U.S. withdrawal from Afghanistan is largely done, with an official end date set by Biden of August 31.

The latest U.S. intelligence assessment said Kabul could fall to the jihadists by next month. The Pentagon acknowledged Wednesday that security in Afghanistan is “deteriorating” as the Taliban continues to seize more territory.

U.S. lawmakers and critics of Biden’s decision to withdraw from Afghanistan have raised concerns of the possibility of a full Taliban takeover of the country and the void that could be left without American forces.

As can be perceived by the Taliban’s “official” name the Islamic Emirate of Afghanistan, the end is to enforce an Islamic mandate based on sharia law as commanded by the Prophet Muhammad.

This is sustained by Islamic jurisprudence which teaches that when a non-Muslim force enters a Muslim land, as the U.S.-led forces have done, defensive jihad becomes the individual obligation of every Muslim (fard ayn), rather than a collective obligation of the entire umma (Islamic community), and need not be declared by anyone.

In the words of S Syed Abul Ala Mawdudi (1905-1979), the world-renowned Islamic scholar who traced his paternal ancestry to Muhammed:

Islam is a revolutionary faith that comes to destroy any government made by man. The goal of Islam is to rule the entire world and submit all of mankind to the faith of Islam. Any nation or power that gets in the way of that goal, Islam will fight and destroy. In order to fulfill that goal, Islam can use every power available every way it can be used to bring worldwide revolution. This is jihad.

This is because “Muslim nations,” as stated by the Emir of Jamaat-e-Islami, the Islamist Maulana Abul Ala Maududi (1903-1975), “have a command from Allah to rule the entire world and to be over every nation in the world.”

Islamization of the world began in Mecca and spread first to the Middle East and South Asia through violence in compliance with the Quranic tenet:

“Fight those who believe not in Allah and the Last Day and do not forbid what Allah and His Messenger have forbidden, and do not practice the religion of truth, even if they are of the People of the Book — until they pay the jizya with willing submission and feel themselves subdued.” —Sura 9, 29

This was also reasserted by Iraqi Shiite cleric Sabah Shabr who in 2015, discussed the spread of Islam by the sword in a series of lectures about Jihad. Sabah confirmed that most Islamic countries were conquered by force. He said that Muslims should not try to appease the Jews and Christians by denying this and that the “true religion of Allah should be spread by the sword.”

Can the Taliban be Trusted?

During the five-year history of the Islamic Emirate prior to their defeat in 2001, the Taliban regime imposed sharia law in accordance with the Hanafi school of Islamic jurisprudence.

Women (and girls), for example, were

The IEA also did not hold elections, as their spokesman explained:

“The sharia does not allow politics or political parties. That is why we give no salaries to officials or soldiers, just food, clothes, shoes, and weapons. We want to live a life like the Prophet lived 1400 years ago, and jihad is our right. We want to recreate the time of the Prophet, and we are only carrying out what the Afghan people have wanted for the past 14 years.”

After its defeat in 2001, a large number of Taliban regrouped in Peshawar and the northwest frontier areas of Pakistan. With inadequate security forces and U.S. attention shifted to Iraq, by 2008, the Taliban insurgents had regained control over much of the Southern region of Afghanistan, especially Kandahar and Helmand provinces, the largest area of poppy cultivation in the world.

U.S. allies worry about the consequences of the withdrawal, including the rise of terrorism, a blow to democracy and women’s rights and the erosion of Western influence around the world.

Does this seem as if the self-proclaimed Islamic Emirate of Afghanistan is interested in peace? This is not to demonize the Biden administration, for it the pretentious peace efforts with the Taliban started under President Donald Trump, but until the West acknowledges that jihadists like the Taliban are complying with their sacred texts, then there will be no hope for peace.

1 thought on “Taliban Islamic Conquest of Afghanistan — Not the religion of peace!”