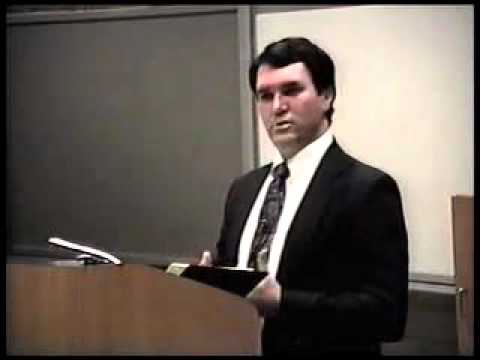 Watch and learn as Dr. Greg L. Bahnsen teaches Christians how to think like Christians. Bahnson reveals that our job as Christian apologists is to not change unbelieving hearts, but to simply close the mouth of the unbeliever.

Greg Bahnsen (1948-1995) was an ordained minister in the Orthodox Presbyterian Church and a full-time Scholar in Residence for the Southern California Center for Christian Studies. He received his Ph. D. in philosophy from the University of Southern California, specializing in the theory of knowledge. He previously received the B.A. (magna cum laude, philosophy from Westmont College, and then simultaneously earned the M.Div. and Th. M. degrees from Westminster Theological Seminary. Dr. Bahnsen lectured to a broad range of evangelical Christian groups at many colleges and conferences. He was an experienced apologist and debater, a clear and cogent teacher of the Christian worldview who was devoted to training believers in understanding and applying the Christian faith to every area of life. He published numerous scholarly articles, a number of well-known books, and has over 1,500 recorded lectures and sermons.

Reviewed by Monergism: The responsibility of Christians to proclaim and defend their faith reasonably and intelligibly, in the face of worldviews and philosophies that are antagonistic to Christianity, is a serious biblical concern. So how do we go about equipping ourselves for the task? In order to defend the faith adequately, must we be current with the prevalent philosophies and epistemologies of the day, and eloquent enough to mount a persuasive argument within the confines of those philosophies? In other words, must we be skillful enough thinkers to beat the atheists on their own playing field? No, Dr. Bahnsen would insist; although understanding philosophy and epistemology may be useful, ultimately, if we would be successful apologists, we only need to learn to think as Christians. And in this clear, scriptural, penetrating series of lectures, he demonstrates exactly what that means, and how it can equip any Christian to be a biblical and competent apologist.

What is the goal of apologetics? Is it to persuade men to embrace Christianity, to out-reason unbelievers into the Kingdom? Bahnsen would suggest, on the contrary, that while conversion is the ultimate goal, that end is properly the work of the Holy Spirit; our task is just to stop the mouths of unbelievers, to leave them without excuse, and let the Spirit work as he will in a heart whose self-deception has been uncovered. And make no mistake, the unbeliever is self-deceived. His problem is not that he’s an unbiased, reasonable man who just doesn’t have enough evidence for the existence of God; his problem is that he hates God and suppresses the truth, so that he can justify his pursuit of ungodliness. He claims that he wants to examine evidences for Christianity from a neutral platform; but if there’s one thing we must know about apologetics, it’s that he’s not neutral, and we shouldn’t be. To attempt to meet him on his terms, to enter his anti-God worldview in order to convince him of what he already knows but suppresses in ungodliness, is to lose the battle from the beginning; it’s to justify him in his presuppositions, which are utterly opposed to the message we have to give him.

So then, how do we go about the task of defending the faith to unbelievers and atheists? Bahnsen would suggest that we simply take those Christian truths which even the unbelievers cannot give up – things such as moral absolutes, human dignity, the existance of universals, the one and the many, the uniformity of reality – and show how, on the basis of their own presuppositions, they are impossible, unintelligible, self-contradictory. Those things about which they express moral outrage, whether it be the abuse of children, the war in Iraq, or any other issue, demonstrate that they do not actually believe what they say they believe about reality. In fact, they must borrow from the Christian worldview even to advance those opinions. Really, the basic “proof” of Christianity is that, without it you cannot prove anything.

Of course, this is essentially just a presentation of the principles of what is called “presuppositional” (in contrast to “classic,” or “evidential”) apologetics. And as Bahnsen walks through scriptural principles and examples, he builds up a compelling case that the approach of presuppositional apologetics is uniquely faithful to the biblical witness. It is unique both in its refusal to compromise on the non-negotiable tenets of the Christian worldview and in its ability to “shut the mouths” of unbelievers, and make clear their inconsistency and self-deception.

The field of presuppositional apologetics has a reputation for being heady, difficult stuff (after all, was not its “father” the brilliant and sometimes obscurely erudite Cornelius Van Til?); but in reality, the basic approach is simple and liberating to any believer largely unschooled in philosophy or complex argumentation. It only requires that he learn to think consistently as a Christian, and to show how even non-believers are forced to think as a Christian in certain inconsistent ways. And with lucid teaching, adept illustration, and helpful exemplary anecdotes, Bahnsen shows just how possible it is for the unphilosophic believer to be a truly Christian apologist in any situation.

Especially geared for prospective secular college students, but highly recommended for all believers!

We have good news! Want to know how to be saved? Click here and here for more.

4 thoughts on “Basic Training For Defending The Faith — Greg Bahnsen”