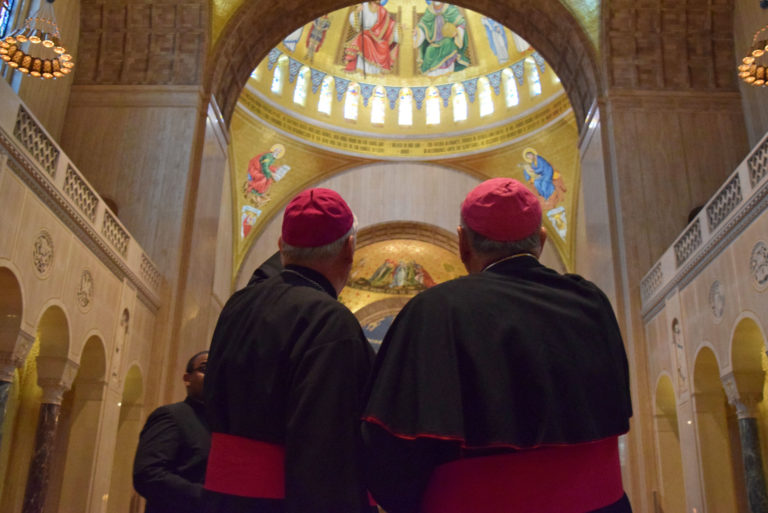 Jesus challenges to understand that the harvest is ready. We just need more workers.

Should we consider Catholics as a part of our evangelistic and apologetics work? I think many of us may be uncomfortable with dealing with this issue. The question is whether the Catholic Church is a religion or just another Christian denomination?

Here is a view I agree with. My assessment is that when you reject scripture as the sole source of authority and outsource doctrine to a corrupt human being, you are now in a deep heresy.

Consider this from John MacArthur. https://www.gty.org/library/sermons-library/90-291/the-pope-and-the-papacy

Reclassifying the Pope, reclassifying Roman Catholics as believers isn’t that simple. It has massive implications. It has implications that literally overturn centuries of missionary effort. It has massive implications that overturn centuries if not millennia of martyrdom. In the long war on the truth, the most formidable, relentless, and deceptive enemy has been Roman Catholicism. It is an apostate, corrupt, heretical, false Christianity; it is a front for the kingdom of Satan. The true church of the Lord Jesus Christ has always understood this, and even through the Dark Ages, from 400 to 1500, prior to the Reformation, genuine Christian believers set themselves apart from that system and were brutally punished and executed for their rejection of that system.

The scope of the opportunity for evangelism is huge. There are 1.34 billion Catholics worldwide. That is a whole lot of people ready to come to Jesus based on faith alone and not a works-based system of legalism. [Source for the following quotes: https://www.gotquestions.org/Catholic-Church.html]

While there are sincere Catholics who love the Lord and do not worship Mary or the pope, the doctrines themselves suggest a separate, works-based religion rather than a simple denomination within Christianity. This departure from truth is nothing new. When Paul and Barnabas were in Antioch, “certain people came down from Judea to Antioch and were teaching the believers: ‘Unless you are circumcised, according to the custom taught by Moses, you cannot be saved’” (Acts 15:1). These false teachers had mixed grace with works and were creating an aberrant faith that was leading many astray. The Catholic Church has done the same by creating a religion filled with laws, sacraments, and the undue adulation of other human beings—things God never sanctioned. None of us have the right to add to or take away from the revealed Word of God or the sacrifice of Christ Jesus on our behalf, and to do so creates a false religion.

So, what should we think about priests? Are we not a “kingdom of Priests”? Is that what God wants. There is no role of a priest in the New Testament world.

Another strong departure from orthodox Christianity is the Catholic insistence that an earthly priest is necessary as an intermediary between us and God. According to the The Canons and Decrees of the Council of Trent: Canons Concerning the Most Holy Sacrament of Penance, “If anyone denies that sacramental confession was instituted by divine law or is necessary to salvation; or says that the manner of confessing secretly to a priest alone . . . is at variance with the institution and command of Christ and is a human contrivance, let him be anathema” (Canon VI). The official Catholic teaching, then, is that people who do not confess their sins to a human priest cannot be saved and are, in fact, cursed for eternity. This doctrine contradicts 1 Timothy 2:5, which could not be clearer in renouncing the Catholic doctrines of Mary and the priesthood: “There is one God and one mediator between God and mankind, the man Christ Jesus.

The way the Catholic Church treats Mary is particularly problematic. This is a horrific heresy, and it is shameful.

One of the most blatant examples of the Catholic Church becoming a separate religion is in their extreme overemphasis on the importance of Mary, practically treating her a fourth member of the Trinity. Scripture tells us very little about the woman chosen to bear the Son of God (see Luke 1: 26–56; 2:16–52), yet Catholic doctrine has recreated Mary and given her an exalted place that the Bible never implies. Pope Leo XIII wrote, “By the will of God, Mary is the intermediary through whom is distributed unto us this immense treasure of mercies gathered by God, for mercy and truth were created by Jesus Christ. Thus as no man goeth to the Father but by the Son, so no man goeth to Christ but by His Mother” (Encyclical of Pope Leo XIII, On the Rosary, Octobri mense, September 22, 1891).

Jesus never said any such thing about coming to Him through Mary. Instead, Jesus said, “Come to me, all you who are weary and burdened, and I will give you rest” (Matthew 11:28). Jesus declared that no one comes to the heavenly Father except through Him (John 14:6). Every bit of Jesus’ communication was related to His oneness with the heavenly Father, not His earthly mother (Matthew 11:27; Luke 10:22; John 7:28–29). His only references to His mother actually relegated her to the level of everyone else (Mark 3:32–34) and also assured that she would be taken care of after His ascension to His Father (John 19:27). That’s it. Nothing about venerating Mary or praying through her. If Pope Leo’s words were accurate, wouldn’t Jesus have told us so?

Pope John Paul II added to the heretical deification of Mary. Quoting Pope Pius XII, he said, “Preserved free from all guilt of original sin, the Immaculate Virgin was taken up body and soul into heavenly glory upon the completion of her earthly sojourn. She was exalted by the Lord as Queen of the Universe” (Encyclical of Pope John Paul II, On the Blessed Virgin Mary in the Life of the Pilgrim Church, Redemptoris Mater, March 25, 1987; cf. Pope Pius XII, Apostolic Constitution Munificentissimus Deus, November 1, 1950). The Bible does, in fact, refer to the “queen of the heavens,” but it is in rebuke of the idolatrous Israelites for offering sacrifices to other gods (Jeremiah 7:18). The teaching that Mary is the Queen of the Universe is idolatry, although the Roman Catholic Church does not want to see it that way. At the very least, the statement of Pope Pius and Pope John Paul is complete fabrication and a departure from true biblical Christianity.

And this issue of extra-biblical practices. One of the most blatant is purgatory. It cannot be found in the scripture but the Catholic Church has made it up.

In the Catholic Church, many extra-biblical practices have been added that create a different religion out of Christianity. While those who consider themselves Catholic can also be truly born again, one does not inherit eternal life by being a good Catholic (Titus 3:5–7). One can be a Christian in spite of being Catholic, just as one can be a Christian in spite of church attendance of any kind. However, Catholic teaching has gone far awry from strict adherence to the Bible, adding human ideas and “teaching as doctrines the commandments of men” (Mark 7:7). The Pharisees of Jesus’ day had done the same thing with God’s Law, and it appears that Catholic tradition follows more closely in the footsteps of the Pharisees than those of the apostles.

Is the Catholic Church the only true church of our Master Jesus? The answer is a resounding, no?

The Roman Catholic Church considers itself the only “true” church and traces its beginnings to Jesus and the apostles. It maintains that all other denominations or branches of Christianity are aberrant and have fallen away from the true teachings of the “mother church” and therefore from Christianity. But is this true? Our website contains many articles related to Catholicism, its origins, and practices. So this article will deal specifically with whether or not the Catholic Church is, in fact, Christian or a separate religion altogether.

Christianity, considered as a major world religion, has several branches: Catholicism, Orthodoxy, and Protestantism. Defined this way, Catholicism is one division of Christianity. But true biblical Christianity is not a religion in the sense that one “joins” it by becoming a member of an organization. Jesus simplified what it means to be a Christian when He told Nicodemus that one must be “born again” (John 3:3). That new birth is an individual experience between God and a repentant heart and is not dependent in any way upon a priest’s blessing, baptism, or any other outward action we take. Ephesians 2:8–9 is clear that salvation is by grace through faith in the death and resurrection of Jesus Christ as full payment for our sin. When we enter into that saving relationship with God, we become “new creatures” (2 Corinthians 5:17). Our new nature is not a slave to sin as we once were (John 8:34; Romans 6:16). This new nature produces righteous living, not in order to become saved, but because we have been saved (1 John 3:7–10).

We have good news! Want to know how to be saved? Click here or here for more.

2 thoughts on “Is the Catholic Church a separate religion or a denomination of Christianity? | Apologist Answers”